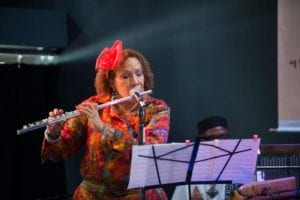 Dr. Margaux Simmons is a composer, flutist, improvisor, and music educator. She studied with Cecil Taylor at Antioch College and Pauline Oliveros and Will Ogden at UC San Diego. She is a founding member of The Pyramids and has traveled, composed, studied and performed music extensively in North America, Europe, and Africa. Since 2018 she has toured regularly with the Pyramids again, including shows at Blank Forms in Brooklyn, the Pori Jazz Festival in Finland, and Hana-bi on the east coast of Italy. She worked as Professor of Music at Hampshire College, Amherst, MA., 1987 – 2007, and as a Curator of The Museum at Wounded Knee, in South Dakota, Pine Ridge Indian Reservation, 2007 -2010. She works with the University of Orange, since 2013 as the teacher of UofO’s longest running community music class, and since 2016 as co-director of the Music City Project. In 2019 she was commissioned by UofO to write a new work for antiphonal choirs, percussion, violin, and piano to commemorate 400 Years of Inequality, 1619-2019. The piece was premiered in Orange, NJ on December 5th 2019.

Listen to a selection of Margaux’s work on her Soundcloud page.

Watch Margaux perform with the Pyramids during their 2019 summer tour.

For more information on Margaux’s work or to inquire about performance rights or commissions, please contact University of Orange’s Music City team at music.city.orange.nj@gmail.com

You Have the Right to Remain Silenced from University of Orange on Vimeo.

For Noni and Bill from University of Orange on Vimeo.