As a part of Jan Term 2022: Year of the Programmatic Tiger, UofOrange hosted a four week, free, virtual reading group of “Homeboy Came to Orange”, the memoirs of Ernest Thompson, co-written by his daughter and UofOrange co-founder Dr. Mindy Thompson Fullilove. See below for videos from each of the sessions. 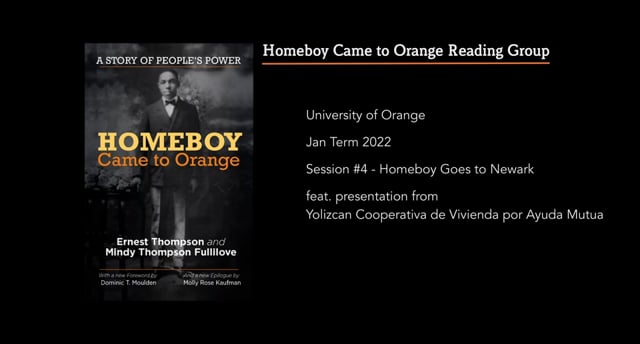 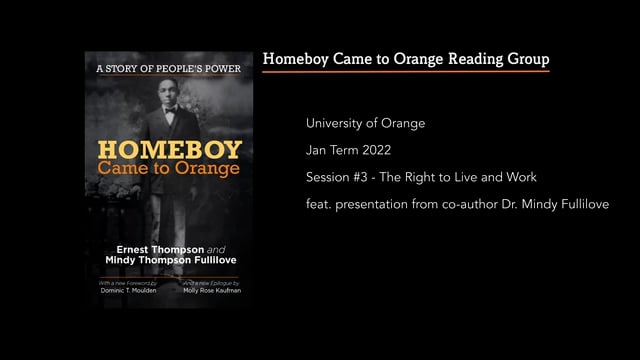 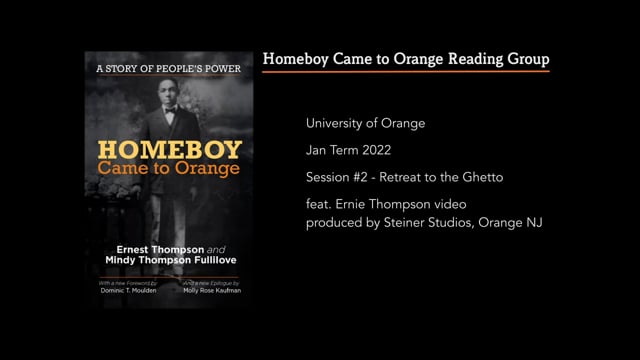 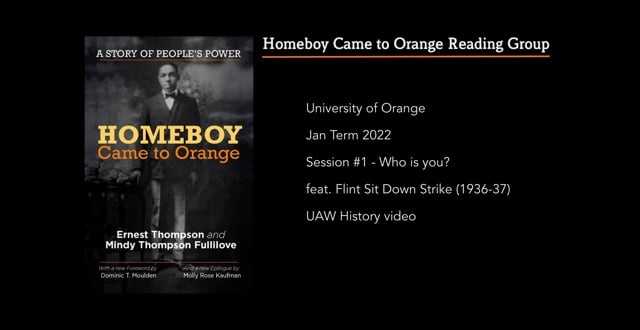 Homeboy Came to Orange is the story of a union organizer who found a second career in community organizing and helped a Jim Crow city become a better place.

Ernest Thompson dedicated his life to organizing the powerless. This lively, illustrated personal narrative of his work shows the great contribution that people’s coalitions can make to the struggle for equality and freedom. Thompson cut his teeth organizing one of the great industrial unions, the United Electrical Radio and Machine Workers of America, and brought his organizing skills and commitment to coalition building to Orange, New Jersey. He built a strong organization and skillfully led fights for school desegregation, black political representation, and strong government in a city he initially thought of as a “dirty Jim Crow town going nowhere.” Thompson came to love the City of Orange and its caring citizens, seeing in its struggles a microcosm of America. This story of people’s power is meant for all who struggle for human rights, economic opportunity, decent housing, effective education, and a chance for children to have a better life.

Ernest Thompson (1906-1971) grew up on the Eastern Shore of Maryland, on a farm that had been given to his family at the end of the Civil War. The family was very poor and oppressed by racist practices. Thompson was determined to get away and to obtain power. He migrated to Jersey City, where he became part of the union organizing movement that built the Congress of Industrial Unions (CIO). He became the first African American to hold a fulltime organizing position with his union, the United Electrical Radio and Machine Workers of America (UE). He eventually headed UE’s innovative Fair Employment Practices program and fought for equal rights and pay for women and minority workers. Thompson also helped build the National Negro Labor Council, 1951-1956, and served as its director of organizing. In 1956, under the onslaught of the McCarthy era, UE was split in two, and Thompson lost his job. His wife, Margaret Thompson, brought the local school segregation to his attention. Ernie “Home” Thompson organized to desegregate the regional schools, building strong coalitions and political power for the black community that ultimately served all the people of Orange.

You can purchase a copy of the book online here. If you are local to Orange NJ and would like a free copy, please contact info@universityoforange.org (free copies available while supplies last).